Learn how to make the perfect paleo apple crisp! With a crunchy sweet topping and tender, tart apples, this paleo apple crisp recipe is quick to make and its grain-free, gluten-free, and vegan. 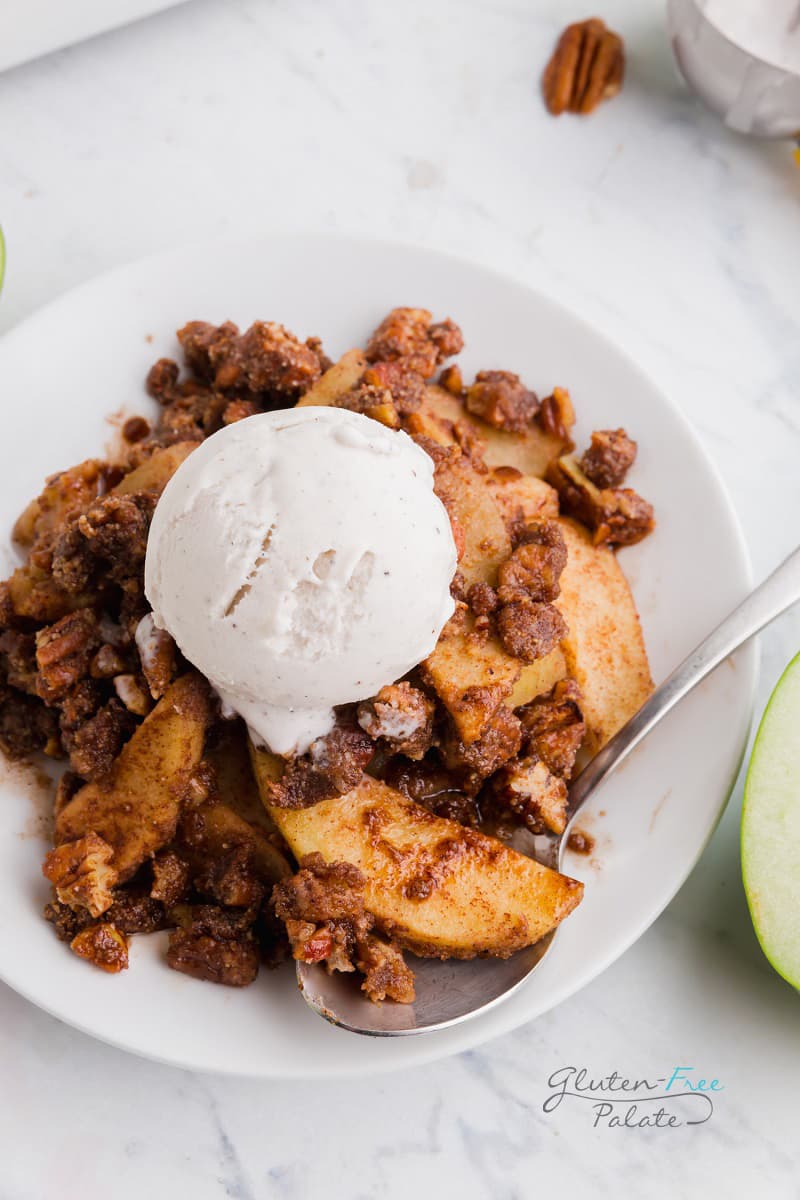 We bring it to parties and potlucks and everyone, including people who don’t eat paleo, say it’s the best paleo apple crisp.

What makes this paleo apple crisp recipe the best? The filling is just apples and spices, sweet and tart granny smith apples tossed with a couple of spices.

And the topping is crunchy, sweet, and full of flavor.

This paleo apple crisp recipe pulls together quickly and bakes up in under and hour.

Lots of people add extra ingredients to the filling but the best apple crisps are the ones that highlight the apples and compliments them with a crunchy, spicy topping. 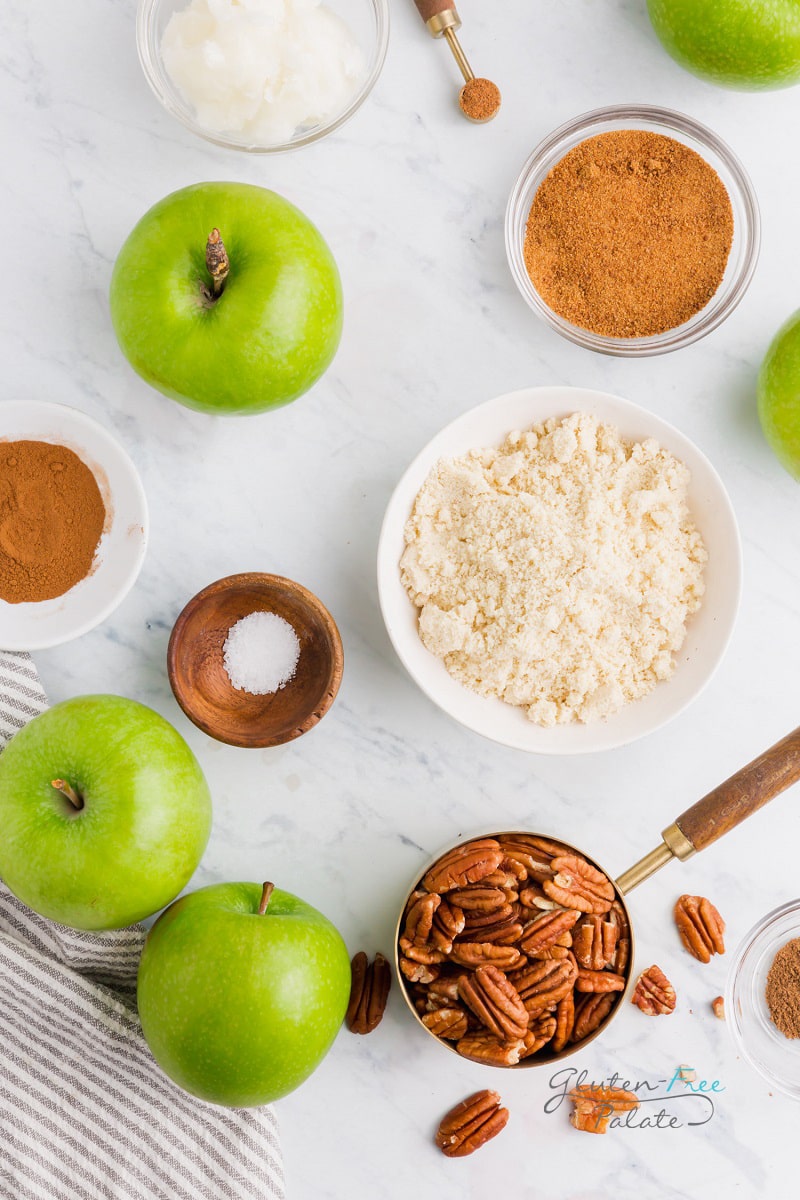 For this recipe I used almond flour as the base ingredient for the topping and coconut oil. It also has pecans, coconut sugar, and spices.

I haven’t teste this paleo apple crisp with other flours but if you don’t need to eat paleo you can make my gluten free apple crisp.

I also haven’t tested this recipe with sugar free sweeteners yet, but if I do, I’ll be sure to update this recipe post.

When working with almond flour, spoon the almond flour into the measuring cup and then level it.

Don’t scoop your measuring cup into the almond flour or you’ll end up with too much almond flour.

You can enjoy this paleo apple crisp as-is, with a dairy-free vanilla ice cream, or coconut whipped cream.

If you eat dairy, you can top this almond flour apple crisp with your favorite vanilla ice cream or whipped cream. 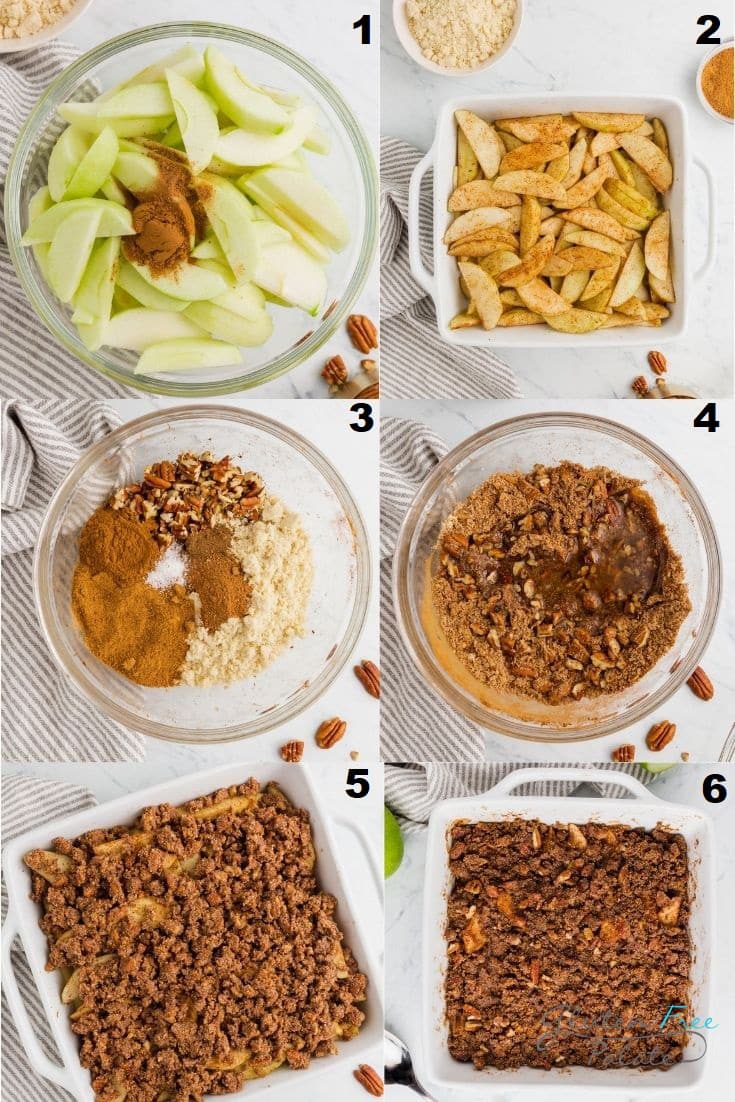 HOW TO MAKE PALEO APPLE CRISP

These numbered steps match the numbered photos above and are for illustration purposes. For the complete list of ingredients and instructions, please see the recipe below.

Can I use ghee in paleo apple crisp?

Yes, you can use ghee in this paleo apple crisp recipe. Simply swap out the coconut oil with melted and cooled ghee.

You can also swap the coconut oil with butter, if you’d like. 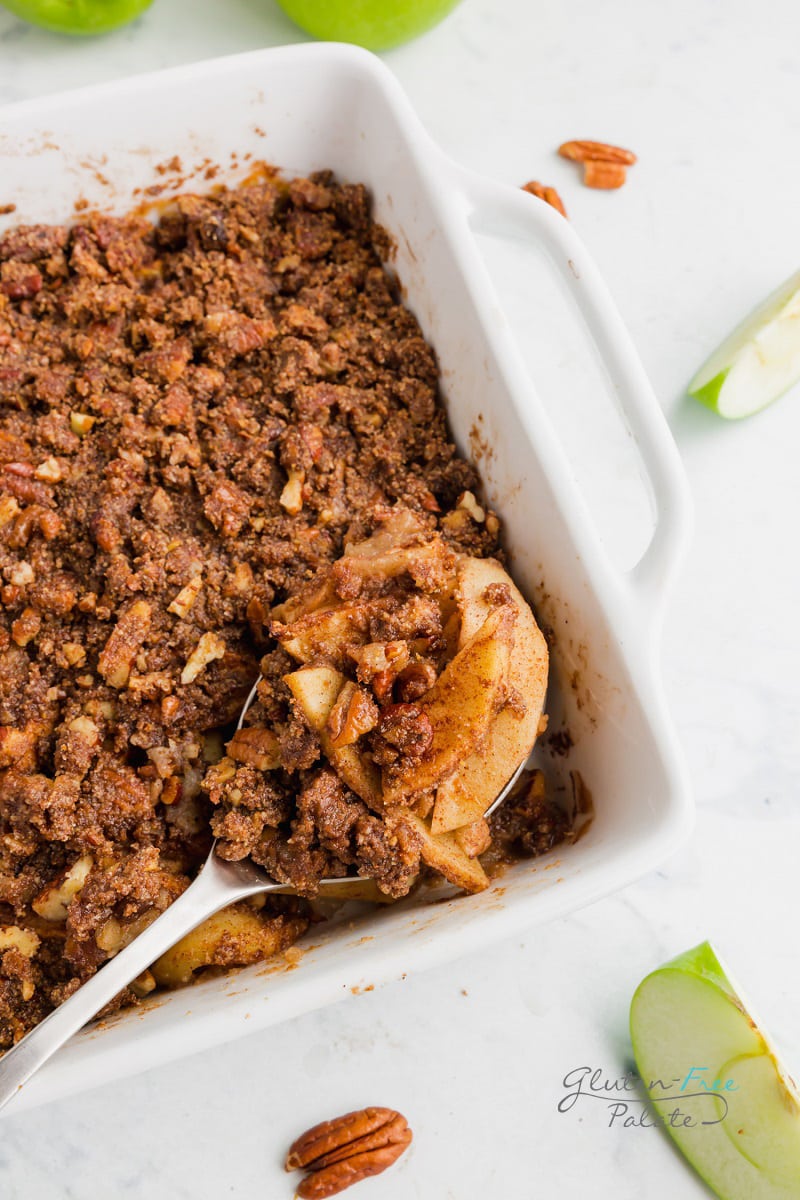 Working with coconut oil in crisps

Be sure to freeze the coconut oil and chop it into pieces before you add it to the dry mixture. This will ensure it doesn’t melt too quickly when baking.

What apples are good for making crisps?

We like to use granny smith apples, but you can use your tart apple of choice. Some other favorites are Honeycrisp and Golden Delicious apples.

This paleo apple crisp has the perfect balance of spices baked on top of delicious, tart apples.

It’s easy to make and you can double or triple the recipe if you need to feed a crowd. 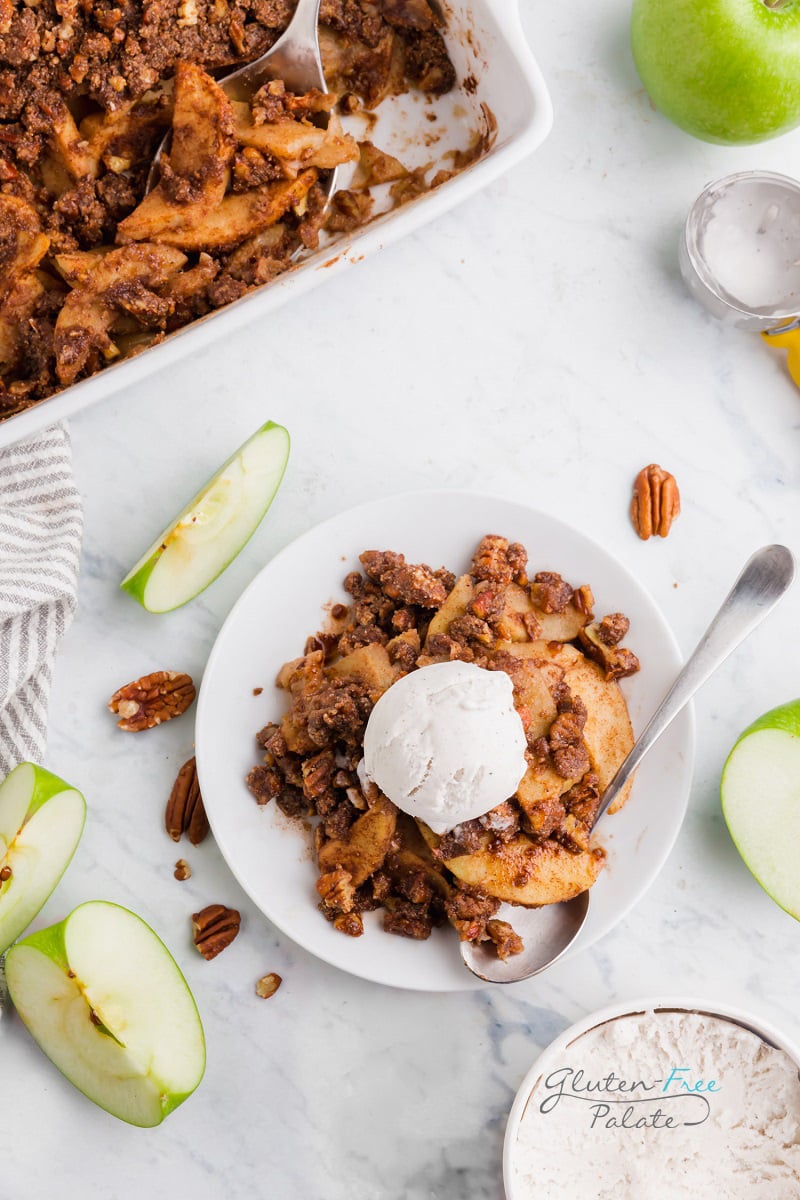 This apple crisp recipe does not freeze well.

If you don’t need to follow a paleo diet, you might also like my Gluten Free Peach Crisp. My Gluten Free Blackberry Crisp is also a reader favorite.

Did you make this paleo apple crisp? Please leave a starred rating and a comment below letting me know what you thought.

This nutrition info is based on the exact ingredients and brands that I used a the time. It may not be 100% accurate. Please check your ingredients nutrition labels. 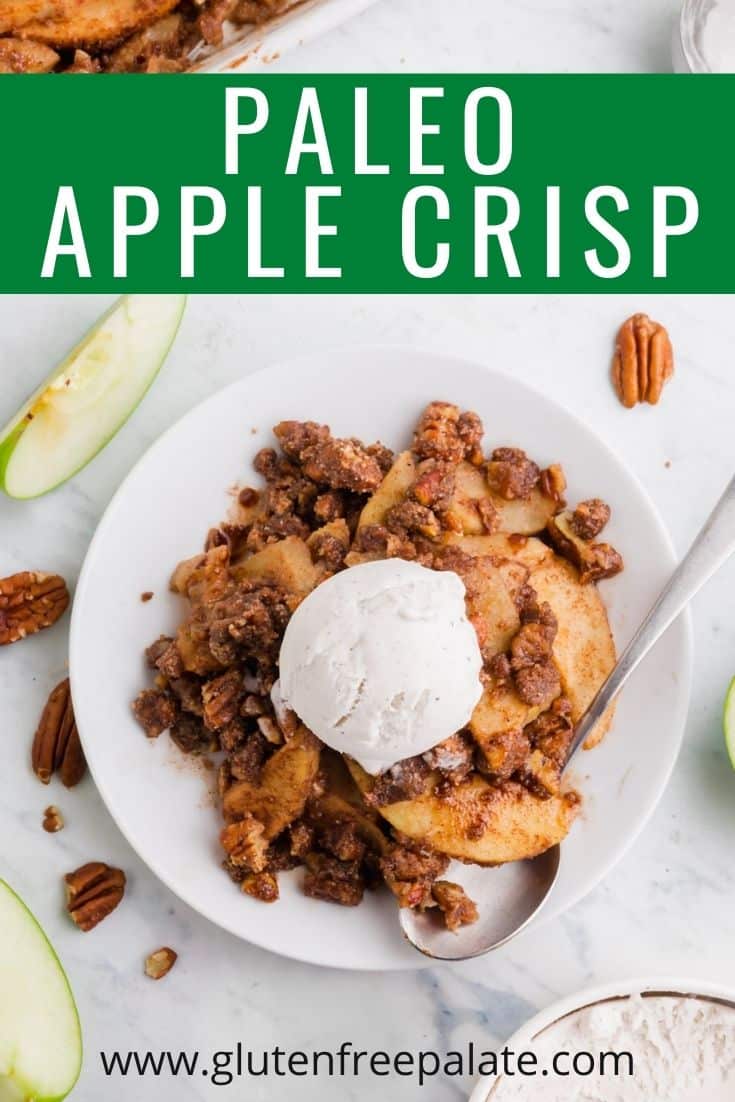 Welcome to Gluten Free Palate! We create simple, easy-to-follow recipes that are always gluten-free, often dairy-free, and sometimes Paleo. We've got hundreds of recipes, resources, and travel articles showing you how you can enjoy gluten-free foods while living your best gluten-free life.